Pollinations is the process of plant reproduction.

The process of pollination of plants is an essential part of our food supply. Our honey, fruits, berries, vegitables all come from the reproduction of flowering plants.With out plant pollination there would be no “next generation”.

Is the process of plant reproduction where the male plant DNA, in the form of pollen, is transferred to the female part of the plant known as the “stigma”. Multiple scientific fields of study have been used to examine pollination including Botany (plant study), Entomology (insect study), Ecology, Agriculture, and Horticulture. Pollination as an event between flower and pollen Vector was first discussed in the 18th century by Christian Konrad Sprengel. It is important in horticulture and agriculture, because fruit depends on fertilization which is the purpose of reproductive pollination. The study of pollination by insects such as honey bees is known as anthecology.

Unlike animal reproduction, flower bearing plants actually undergo a double fertilization process since the pollen is not the direct male DNA package transferred to the female plant. Instead the female “gametophyte” (female reproductive tissue) transforms the male DNA from pollen and is changed by the female into new male DNA. This allows for variations in plant species.

The male pollen grain or gametophyte (angiosperm) containing the male gametes or DNA package transported to a female reproductive part called the stigma. There it grows and its pollen tube moves down to the ovary. These gametes travel down to where the female gametophyte(s) containing the flower’s DNA are held within the “Carpel”. One nucleus fuses with the polar bodies and create the endosperm tissues and another nucleus to the ovule to produce the embryo.

In gymnosperms, the ovule is not contained in a carpel, but instead lies on the surface of a support organ, much like a cone, so that the carpel tissue need not penetrate the tissue. Details of the process vary according to the division of gymnosperms. The “stigma” is the part of the carpel in angiosperms that receives the pollen and the receivers in gymnosperms are called “micropyle”

Pollination is an essential part of the reproduction of flowering plants

resulting in the plant reproduction and of genetically diverse offspring. 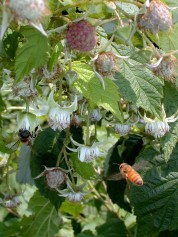 What is a pollen vectors? A transport vehicle that carries pollen form plant to plant are called “Vectors”. Pollen vectors can be bees, mammals, other insects, reptiles, birds, and others that routinely transport pollen there by inadvertantly being the main characters in pollination and how plants reproduce, bare fruit and make offspring. This is usually as a result of their activities when visiting plants for feeding, breeding, etc. The pollen clings to a vector’s body parts such as face, legs, hair, feathers, and moist spots; depending on the particular vector. Honey bees have special body parts used to carry pollen from which nectar is gathered and honey is produced. An “Andrena” bee collects pollen among the stamens of a rose. The female carpel structure appears rough and globular. The bee’s stash of pollen is in a basket-like structure on its hind leg.

This “vector” relationship is critical for the pollination of most plant species.

Almost any animal that frequently visits or encounters flowers is a likely pollen vector. Some species like a crab spider that stops at one flower for a time and then moves on, might carry pollen incidentally, but most pollen vectors are those that routinely visit the flowers for some functional activity. Like bees they might feed on pollen, or plant organs, or on plant secretions such as nectar, and carry out pollination as they go about their tasks. Some flowers prefer certain types of vector over all others. This need not always be an effective strategy, because some flowers that are of such a shape that pollinators that pass by their anthers and stigmata on the way to the nectar, get robbed by insects that are small enough to bypass the normal channels, or by short-tongued bees that bite through corolla tubes to extract nectar at the opposite end to the anthers and stigma. Some flowers even have special parts used to trap pollinators increasing effectiveness. Generally though, plants that rely on pollen vectors have evolved to be compatible with their particular type of vector. Day-pollinated species tend to be brightly colored, for example. If they are pollinated largely by birds or specialist mammals, however, they tend to be larger and have larger nectar rewards than plants that are pollinated by insects. They also tend to have longer flowering seasons because their pollinators would be likely to starve if the pollination season were too short.
Reptile pollinators are known, but they form a minority in most situations and they are most found in island systems, where insects and sometimes birds less diverse. Adaptation to a lack of animal food and of predation pressure, might therefore favor reptiles more inclined to feed on pollen and nectar.

Mammals are not generally thought of as pollinators, but some rodents, bats and marsupials are significant pollinators and some even specialize in pollination. In South Africa certain species of plants have also adapted to pollination by rodents. The flowers bloom near the ground and are yeasty smelling, not colorful. Sunbirds reject the nectar with its high xylose (natural sugar found in flowering plants) content. The mice, however, can digest the xylose and they eat large quantities of the pollen.

Examples of pollen vectors include many species of bees and wasps, which transport pollen of many plant species. As those who understand “the birds and the bees” already know. Bees tend to be the most effective pollinators for a majority of flowering plants.

In agriculture: Crops pollinated by bees:

Blueberries (pollinated by bumblebees) – Unlike honey bees, bumblebee hives need to be bought each year as the queen bees need to hibernate. They are used mostly because they offer advantages with certain fruits such as blueberries. One reason is that they are active even at colder outdoor ambient temperature.

Well-pollinated blackberry blossom begins to develop fruit. Each individual “drupelet” has its own stigma and good pollination requires a significant amount of pollen to the flower so that all drupelets develop.

Pollination Management is a branch of agriculture whose purpose is to protect and enhance present pollinators and often involves the development of pollinators in monoculture situations, like commercial fruit orchards. The largest managed pollination example in the world is the California Almond Orchards, where nearly half of the US honey bees (about a million hives) are trucked to the almond orchards each spring.  The apple crop in New York requires about 30,000 hives, while Maine’s blueberry crop uses about 50,000 hives each year. Bees are also brought to commercial plantings of squash, melons, cucumbers, strawberries, and many other crops. Honey bees are not the only vectors that are managed. There are a few other species of bees which are also raised as pollinators. The alfafa leaf cutter bee is a pollinator for alfalfa in the western USA and Canada. Bumblebees are more and more being bred and used for greenhouse tomatoes as well as other crops.

The impact of natural pollination on the environment and financial impact of natural pollination by insects to agricultural crops has given rise to new financial opportunities. The process improves their quality and quantity, becoming more and more valued. The vicinity of a forest or wild grasslands with native pollinators near agricultural crops, such as apples, almonds or coffee can increase yield by approximately 20%. These improvements brought about by native pollinators may result in forest owners seeking payment for their contribution in the crop results – a simple example of ecological economic value.

Pollination of food crops has become an ecological issue as result of two growing practices. 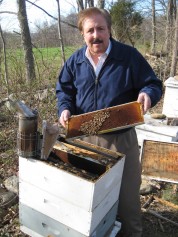 The trend to commercial “monoculture” requires greater and greater concentrations of pollinators at bloom time than ever before, yet the area is food resource poor or even deadly to bees for the rest of the season. The other trend is the shrinking pollinator populations due to pesticide misuse and overuse. New diseases and bee parasites, clear cut logging decline of beekeeping, urban and suburban development, removal of hedges and other habitat, has raised public concern about bees. Widespread aerial spraying (for Mosquitoes due to West Nile fears) is causing an rapid loss of pollinators.
In the U.S. the answer to the pollinator shortage, so far, has been for commercial beekeepers to become pollination contractors. Just as combine harvesters follow the wheat crop harvests across the North American continent beekeepers follow the bloom from south to north and provide pollination for many different crops.
Environmental impacts

(including the most well-known which is called colony collapse disorder) Colony collapse has been on a rapid rise in recent years. Observed losses have had significant economic impacts. Explanations for pollinator decline include: but many possible causes have been proposed: pesticides-primarily neonicotinoids pesticides; infections with Varroa and Acarapis mites; malnutrition; various pathogens; genetic factors; immunodeficiencies; loss of habitat; changing beekeeping practices; or a combination of factors.

The structure of plant-pollinator networks

Demand for beehives sometimes exceeds the available supply. The number of managed beehives in the US has steadily declined since 1945 from close to 6 million to less than 2.5 million today. Conversely, the area of crops needing bee-pollination has increased over 300% during the same time period. Moreover, there has been a severe reduction of winter managed beehives over the past 5 years, which has reached an alarming rate of colony losses at near 30%. Presently, there is an huge demand for beehive rentals not being met. There is a no dispute over the need for the agricultural industry to develop a management tool to entice vectors into cultivations and encourage them to visit and pollinate the flowering crop. By attracting pollinators like honeybees and increasing their foraging behavior, we can increase grower yields and optimize harvests. There are encouraging developments from groups like ISCA Technologies, from Riverside California who created a semiochemical formulation called SPLAT Bloom, modifying the behavior of honeybees, enticing them to visit flowers in designated areas.

How you can help reduce Colony collapse.

Buy only organice products. When you buy plants for you home buy from nurseries that clearly state they are not using plants from seeds treated with neonicotinoids. Honey bees may be affected by such chemicals when they are used as a seed treatment because they are known to work their way through the plant up into the flowers and leave residues in the nectar.

These insecticides called neonicotinoids, which contain the active ingredient imidacloprid, and similar other chemicals, such as clothianidin and thiamethoxam.

Pollen goes unnoticed by most of us, except when … END_OF_DOCUMENT_TOKEN_TO_BE_REPLACED