A local bee-keeper is trying to create a state law that would prevent honey mixed with additives from being labeled as honey. 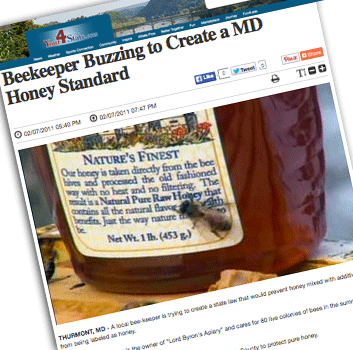 Thurmont’s Byron Rice is the owner of “Lord Byron’s Apiary” and cares for 80 live colonies of bees in the summer months.

Rice has teamed up with state delegate Kathy Afzali of Frederick County to protect pure honey.

They’re creating a bill that would enforce a honey standard in Maryland.

“It has to do with honesty,” said Rice. “It’s necessary so that the consumer understands what they’re getting.”

Currently, honey sold in stores can be mixed with a low-cost high-fructose corn syrup, but still be called honey.

“It’s mixed honey and high fructose corn syrup,” Rice warns. “and they sell it to these packers and the packers turn it around and package it and put a label on it that says honey and it ends up on the shelves all over the United States as well as the state of Maryland.”

Only a hand-full of other states currently have laws regarding honey standards.

Pollen goes unnoticed by most of us, except when … END_OF_DOCUMENT_TOKEN_TO_BE_REPLACED