The following is a compilation of information gathered via various resources. It does not claim any rabbinical authority. It is merely an attempt to answer these two questions.

Why then, since bees are not kosher, is the honey of a bee permitted?

The Kashrus of Honey

Bees suck nectar from flowers with their proboscis (mouth). The nectar mixes with saliva and is swallowed into the honey sac, where enzymes from the saliva break down (invert) the nectar into honey. The nectar is never “digested” it is merely transformed into honey by the saliva. Upon the bee’s return to the hive, the nectar is processed and deposited and the water is evaporated, thereby thickening it into honey which is then sealed in the honeycomb. Beekeepers then extract millions of drops of honey from the cavities of the honeycomb by using a machine that applies centrifugal force to the comb.

The Gemara explains that honey is kosher.

This is because is not an actual part of the bee. Bees function only as carriers and facilitators. Honey is better described as flower nectar which is Kosher. The nectar enters the bee’s honey sac and is transformed into honey. The second opinion in the Gemara permits honey because of a g’zairas hakasuv, a deduction from a pasuk. One may purchase without a kosher certification 100% pure bee honey from Maryland, North Dakota, or any state or country.

There are, however, two things to think of if you are purchasing honey. 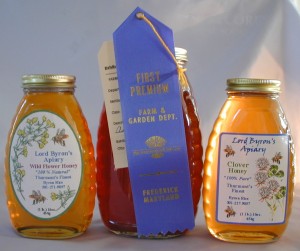 Honey is usually described by the flower from which the bees draw the nectar. One of the most popular varieties of honey, Clover Honey, has been processed by the bees from the nectar of the clover plant. Orange Blossom Honey comes from nectar from orange groves. These bees have sucked the nectar from orange blossoms and transformed it into honey. However, some companies flavor their honey with an orange flavor and call it “orange honey.” This orange flavored honey would require a hechsher, to be sure that the flavors do not contain non-kosher ingredients. Check labels carefully to verify that the product is 100% pure honey with no added flavors.

Another concern is about how to use pure honey on Pesach.

Some honey has been adulterated with additives, such as corn syrup. Corn syrup, a yotzei min hakitniyos sweetener, is derived from corn, which is a legume and may not be used by Ashkenazim on Pesach. Soft drink and beverage makers must substitute this sweetener with liquid sugar when producing Kosher for Passover soda.

Some honey producers have been found to mix the inexpensive corn syrup into honey and illegally label and sell it as “pure honey,” with no mention of this almost undetectable “filler.” In fact, there are records that indicate the use of flour in the adulteration of honey. Although this practice is the exception, one should be careful and purchase pure honey for Pesach with a reliable Pesachdik hechsher. This is not a problem using honey during the rest of the year.

Bee Pollen – Bees collect pollen from flowers with brushes on their legs. The pollen is brushed toward the back of the bee. The bees then press the pollen into baskets found on their legs. The bees add traces of saliva and nectar to make a more effective “press”. This is because pollen is naturally dusty and needs to be held together. Bee Pollen is a widely used health food product that is kosher.

Propolis – Propolis is another important product of the bee. Bees are known to collect resins from the sap of trees and carry it in their proboscis. Propolis is kosher and is used as an anti-bacterial and anti-fungal remedy, polishing agent, and preservative. However, it is only Kosher in its pure state. Companies have been known to process the propolis with non-kosher ingredients such as alcohol. Such a product would require a hechsher.

Royal Jelly – What is royal jelly? The most important bee in the community is the Queen Bee, who is characterized by her constant extra nutritious diet of royal jelly. This is the result of a secretion from the hypopharyngeal and mandibular glands located in the bee’s head. It contains a wealth of protein, vitamins, and fatty amino acids. Royal jelly is commonly found in health food stores, and is an ingredient in various health food products and remedies. Because it is a yotzei min hatamei, an actual product that is secreted from the bee, royal jelly is not kosher and should not be eaten.

Beeswax – Beeswax is secreted from wax glands located on the underside of the abdomen and is used to create the honeycomb in the hive. Bees mature from larvae into adult bees within the cells of the honeycomb. The bees also use it to preserve bee products other than honey.Beeswax is not used in food grade applications since the human body cannot adequately digest this material. It is commonly used in candles, lipstick, shoe and floor polish, as well as buffing wax for surfboards. Since it is not food or “ma’achal”, its status as a yotzei min hatamei (an actual product that is secreted from the bees) does not make it non-kosher. Consequently, beeswax should be considered kosher assuming no non-kosher chemicals are used in its processing, and it contains no non-kosher additives.

The kosher status of pure beeswax is important for various reasons. Beeswax is often extracted to create a chemical used in commercial flavorings. This extract is also a kosher chemical (provided that approved additives and solvents are used) since the actual beeswax is not digestible and so it is not considered food. Thusly, Beeswax is kosher. Chewing beeswax for its pollen content is even permissible. One may even to swallow it, with or without the honey mixed in.

Bee Bread – This mixture of honey and pollen is also known as ambrosia and is considered a kosher food.

Bee Venom – This is synthesized in the venom glands of the bee and is present when a bee stings. Bee venom is collected from bees and is used as an anti-inflammatory agent. It is most often used for the treatment of arthritis. It is non-kosher and may be taken orally only if it is batel b’shishim. It may also be taken by an ill person (choleh she’ain bo sakana) for medicinal purposes if taken shelo k’derech achila (in an abnormal manner). Even if the venom is not batel it may be used topically or by injection.

Bee Parts – If you purchase unfiltered honey with bee parts, you would need to strain out the bee parts as they are non-kosher. The honey would not become treif, if prior to filtration, the honey was heated (in kosher equipment) with the parts inside, because the bee parts only impart a bad taste into the honey that b’dieved do not compromise the kashrus status of the honey (nosain ta’am lifgam).

Honey From The Honeycomb is Kosher – If one does purchase honey in the honeycomb, do not squeeze the honey out of the comb on Shabbos. The honey should be removed before Shabbos.

Apis Mellifica – This is a homeopathic remedy made from body parts of the honeybee. it is not kosher. If, however, the active ingredient is less than one sixtieth of the product and is therefore batel b’shishim (nullified). Moreover, if the inactive ingredients are kosher, and the body parts of the honeybee are batel and non-recognizable, this would be halachically permissible to ingest.

Finally, the bee’s ability to produce such a wide spectrum of products for human consumption is quite wondrous. Appreciating these wonders is a vital part of our harmony with nature. It is also the key to understanding the kashrus status of the many products that are derived from these fascinating insects.

Sweet Fire Honey and our milder